Pratt trusses are very cost-effective as the material savings not only reduces the self-weight of the whole structure but as well ease fabrication. The only problem with a Pratt truss is that when the loads are not predominantly gravitational, there would be a stress reversal, stripping the truss off all the aforementioned benefits.

The Howe truss is also named after its inventor William Howe who first used it on the truss bridge in 1840. A howe truss is the direct opposite of the pratt truss (Figure 3). If a pratt truss is an N truss then, a howe is a reversed N. The entire truss is basically the same but the diagonal bracing is now occupying the opposite joints. This switch in position plays an important effect structurally. Because it also means that the forces in the diagonal and vertical bracings are also reversed. The verticals are in tension while the diagonals are in compression under gravity loading.

However, when a howe is subjected to wind uplift as seen in many open buildings and hanger systems, their structural behaviour is perfectly the same as a Pratt. The diagonals would be in tension while its verticals are in compression. Hence all benefits present in the pratt are also available to the howe. The designer needs to use his discretion to consider carefully the predominant loading in order to select the best of either a pratt or howe. If gravity load is predominant, a pratt is better. But if wind uplift is the predominant load, then the howe is better.

The Warren truss is also known as “Warren girder” is another form of Planar Truss. They are recognised easily by their lack of vertical members and their formation of equal length of diagonal members alternating in compression and tension and forming equilateral triangles (Figure 4). A Warren truss has fewer members than a pratt and howe and is basically more suitable for larger spans. They are also more suitable for uniformly distributed loads due to their ability to evenly distribute the load across a wider range of members.

Figure 4: The Warren Truss
However, a Warren truss will not do well under a point action applied at the nodes as they’re unable to properly distribute the loads. Hence their source of strength under one particular loading pattern is their source of weakness under a different loading pattern. Generally, the Warren truss is easily fabricated compared to the pratt and howe since they have fewer members.

The K truss is a slightly more complicated version of the pratt and howe as shown in Figure 5. In a K truss, the vertical members, as well as the diagonals, have been shortened. The motivation for this comes from the perspective of steel design which aims to reduce buckling by effectively reducing the buckling length of compression members.

Figure 5: The Modified or K TrussThe K truss has similar pros and cons to the pratt and howe. It’s essentially stronger and could possibly lead to a reduction in steel quantity if designed properly. However, this seldom is the case as the elements behaviour cannot be predicted. An element could be in tension under one load combination and then in compression under a different load combination. This often leads to a difficulty in producing a very efficient design. The K truss obviously has more elements, hence would be more expensive to fabricate.

The fink truss is shown in Figure 6. It is the most basic truss form and is essentially used for short span trusses not more than 15m. In its basic form it consists of web members following a V pattern which is repeated several times and get smaller as we go down the slope.
The fink truss is basically used to construct roofs. They rely on the strength of the diagonal members alternating in compression and tension to transmit the forces to the supports. 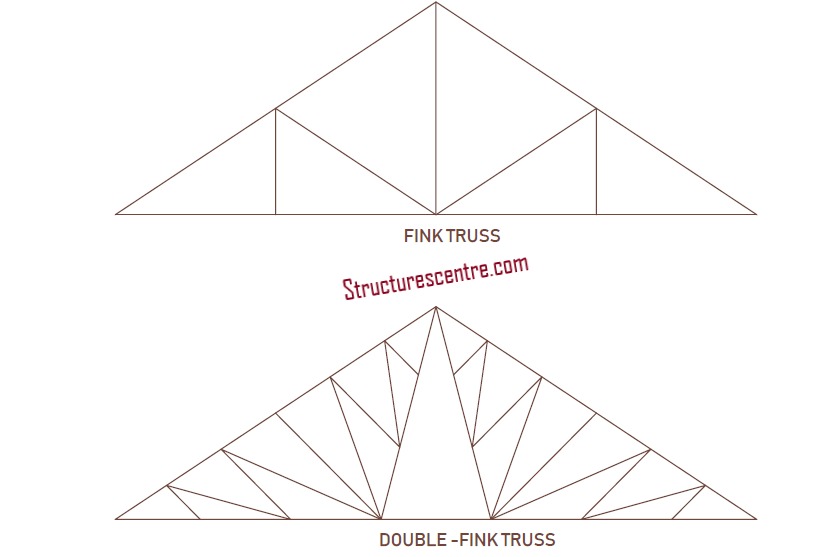 The Vierendeel Truss is also sometimes called a girder just like the Warren truss. But in contrast to a Warren truss, they’re characterized by having only vertical elements and no diagonals.

They are statically indeterminate and in addition to resisting axial forces are subjected to bending and shear due to their geometry and having rigidly connected joints.

Figure 7: The Vierendeel Truss
Vierendeel trusses are usually more expensive to construct due to the section size often required to sustain loads and as a result their use is restrained only to instances where diagonal elements are obtrusive or undesirable.

Having selected any of the truss forms described above, there are some additional considerations to make. The overall depth of a truss should be chosen to satisfy serviceability limit state of deflection. This can be ensured by pre-sizing the truss on the basis of span- depth ratio. Although architectural requirements often have a way of dictating what the external geometry and slope would be. However, the internal geometry is completely within the remit of the truss designer, hence when pre-sizing a truss, a span: depth value of between 10-15 is generally acceptable to keep the deflection of the truss in check, and thus should be used.

In addition to your ability to choose a good truss form, for efficiency the following extra consideration should be made.