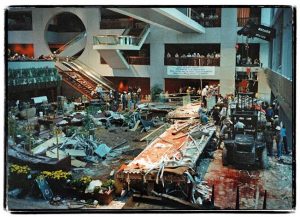 The collapse of the Hyatt-Regency walkway in Kansas City Missouri is widely regarded as the second deadliest structural collapse in the U.S history. This disaster is also known as the structural failure that single-handedly contributed many lessons to the study of engineering ethics of today.

In this post, we’ll take a brief look at one of the most significant events in the construction industry of the 20th century. This event was a turning point in terms of industry awareness of the critical role of the shop drawing process.

The Hyatt-Regency, Kansas city hotel in Missouri was a 40 storey building which began construction in the late 1970s. It was a significant landmark on the city skyline at the time. Prior to its completion, there were numerous delays and setbacks during the construction of the building. Including the dramatic collapse of the roof of the atrium at the north side of the building. Luckily this happened during a weekend, and nobody was injured. The hotel was, however, oﬃcially opened for operations on 1 July 1980.

Its lobby was one of the most interesting features of the building. Two suspended walkways spanned the atrium in the Hyatt Regency, with a second-floor walkway directly below a fourth-floor walkway. The walkways were approximately 120 ft (37 m) long and weighed approximately 29 tonnes.

The investigation into the Failure

An architectural engineer was immediately hired to investigate the cause of the collapse. Apparently, a design flaw was discovered and was found responsible for the collapse. The original design required for the two suspended walkways to be suspended by a single set of hanger rods threaded through the upper walkway box beams and terminating beneath the box beams of the lower walkway (see figure 1).

In fact, another source of concern was that the original design wasn’t even adequate in the first place. According to Kansas building codes, the walkways only supported 60% of the minimum load required. Hence there was a fundamental problem of under-sized members.

Findings of the Investigation

The investigation concluded that the underlying problem was as a result of miscommunication between the designer and the steel fabricators. When the fabricators found that design to be impracticable, they requested approval for the double-rod system by telephone. The structural engineer gave the approval understanding that a written request for the change would be submitted for formal approval. However, the follow-up request was never honoured.

It is even on record that the steel fabricator subcontracted the work to an outside detailer due to increased workload. The outside detailer also under the belief that the double rod connection had been designed never carried out any calculations on the connections himself.

The design documents were later submitted to the approval engineer with a request for expedited approval. He assigned a review to be conducted by a technician. However, the connections were not detailed on the drawings and the technician did not perform any calculations on the connections. Also, the structural engineer only conducted spot checks on some portion of the drawing before the approval engineer aﬃxed his seal on the documents.

The design flaw was so obvious that any first-year engineering student could’ve figured it out. If only it had been checked

Aftermath of the Collapse

We cannot overstate it. The aftermath of any structural collapse is always tragic for all parties involved. According to reports virtually half of the residents of the town were affected directly or indirectly by the tragedy.

The structural engineers involved were found to be culpable of gross negligence, misconduct and unprofessional conduct in the practice of engineering. Although they were all acquited of all charges, however, they all lost all licenses as well as their membership with ASCE.

Months, after this tragedy not less than 300 lawsuits followed which sought a cumulative of 3billion dollars in damages of this only 140million dollars were awarded to the victims and their families.

If you agree that the underlying problem was as a result of miscommunication, then you wouldn’t be wrong. However, the biggest issue here has to do with engineering ethics.

The biggest ethical issue is that of the safety of the public. The people involved did not consider their actions to be endangering the health, safety and welfare of the public. Had this been taking into consideration, no loss of lives would’ve occurred. The engineers would not have lost their licenses or membership. Also, the firm wouldn’t have had its certificate of authority revoked nor would they have been any trial, talk more of multimillion-dollar settlement.

Another ethical issue that cannot be overlooked was that the original design wasn’t even adequate in the first instance. This could lead one to the assumption that the competency required to complete the structure was not even there. At the very least we could assume that the engineers might not have been familiar with the Kansas City Building code. However, the consequences of this lack of knowledge were injury and death of innocent lives, loss of licenses est.

To conclude, all parties involved had ethical questions to answer. From the steel fabricator, outside detailer, the technician to the structural engineer and the approval engineer. They could’ve performed independent calculations but instead, at every level, they all relied on someone’s else’s calculations. The sad thing, however, was that no calculations whatsoever was made. But they all had a moral obligation to put the public safety first.

There are many lessons to be learnt from this failure. But if one thing can be learnt from this failure, it would be never to rely on someone else to do the right thing. Every stage of a construction project is virtually important and has a significant effect on the safety of the overall project. From procurement to prefabrication and construction, negligence at any project stage can have dire consequences. This disaster was a question of engineering ethics and has been consistently used as a perfect example for students in STEM subjects around the globe.